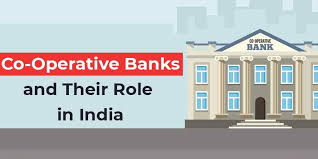 What are cooperative banks?

Some of the main features or characteristics of cooperative banks are:

Cooperative banks are owned and controlled by members, who democratically elect the board of directors. The basic principle of co-operatives “one man one vote” is followed, irrespective of the number of shares held by a member, which ensures that no member enjoys any arbitrary power over other members.

A specified portion of the profits are transferred to Statutory Reserve and other reserves, and then a fair rate of interest is paid on the capital subscribed by the members. A part of this profit can also be distributed to the co-operative members, with legal and statutory limitations in most cases.

It plays a significant role in the financial inclusion of unbanked rural masses.

Structure of Cooperative Banks in India

Broadly, co-operative banks in India are divided into two categories - urban and rural.

On the other hand, Urban Co-operative Banks (UBBs) are either scheduled or non-scheduled. Scheduled and non-scheduled UCBs are again of two kinds- multi-state and those operating in single state.

Types of Cooperative Banks in India

The co-operative banking structure in India is divided into the following 5 categories:

Cooperative banks in India finance urban areas by virtue of:

Registration and legal requirements are comparatively easy compared to traditional banks. It takes a group of ten adults to form a cooperative bank. It needs a base capital of 25 lakhs only as compared to 100 crores of Small Finance Banks.

One of the objectives of the cooperative system is to provide easy accessibility to the rural section of the country so as to protect them from the clutches of greedy money lenders. These money lenders exploit the needy by providing credit facilities at higher rates and by manipulating their accounts. It acts as an effective alternative to this traditional money lending system.

Encouragement of savings and investments

It has encouraged the habit of thrift among the masses. Instead of hoarding money or spending unnecessarily, masses tend to invest and save their money.

Cooperative societies provide credit to agriculturalists at cheaper rates to buy inputs, warehousing facilities, marketing assistance and other facilities. These banks often provide assistance for buying cheap products and services and help them by introducing them to modern technology and better farming methods to improve their output.

Politicians use them to increase their vote bank and usually get their representatives elected over the board of directors in order to gain undue advantages like sanctioning of loans which later gets written off.

The supervision of RBI is not as stringent on cooperative banks as compared to commercial banks. RBI inspects the books of these banks only once a year.

Cooperative banks are controlled under the dual system, i.e. by RBI and by their respective State government which poses a problem in coordination and management.

Cooperative banks are often reluctant to adopt new technologies like computerised data management. Professional management in the banks is often missing due to lack of training of personnel because of lack of funds.

Overdue loans of cooperative banks are increasing yearly, restricting the recycling of funds which in turn affects the lending and borrowing capacity of the bank.

Measures to be taken

PMC Bank is not the first case of failure of the cooperative banking system in India. The Madhavpura Cooperative Bank scam in 2001-02 was a clear signal to bring certain changes in the regulatory and supervisory structure of cooperative banks. But no heed was given at that time. Since then, urban cooperative banks are failing with alarming regularity. Their numbers fell from 1,926 in 2004 to 1,551 in 2018, as per RBI data. These issues need to be addressed and remedied if the Government wants the public to place their trust in the country’s banking system.

In 2015, an RBI panel under R. Gandhi, a former deputy governor at the Central bank, had proposed several governance reforms for the cooperative banking sector, some of which are as follows: