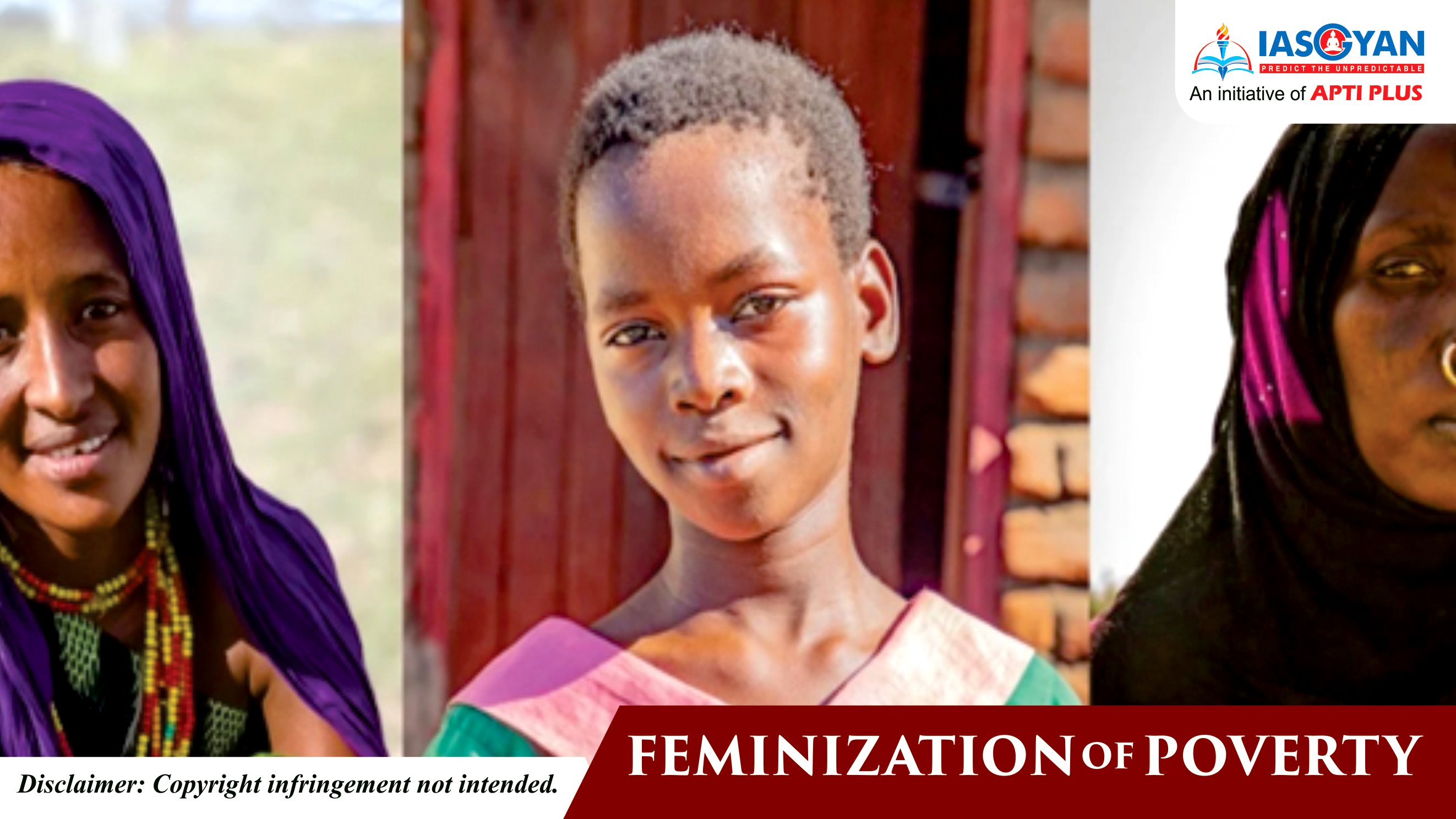 Its precise definition depends on two subsidiary definitions: of what is poverty and what is feminization. Poverty is a deprivation of resources, capabilities or freedoms which are commonly called the dimensions or spaces of poverty. The term feminization can be applied to indicate a gender biased change in any of this dimensions or spaces. Feminization is an action, a process of becoming more feminine. It necessarily involves changes over time or populations (comparing geographical areas, for example). Feminine, in this case, is used to mean ‘more common or intense among women or female headed households’.

Poverty among women or among female headed households

Measures of poverty “among female headed households” and “among women” are not indicators of the same phenomena. Both capture a gender dimension of poverty but in distinct ways. They differ by the unit of analysis and by the population included in each group, and obviously have different meanings. There are reasons to consider both. The goal of headship-based indicators is to represent what happens to specific vulnerable groups and their families, therefore their unit of analysis is the household and the population considered includes both men and women (and children) living in these households, but excludes women and men living in other household formations. Indicators of poverty among females, by their turn, make a complete separation of men and women as individuals, counting or not children as a gendered group in their aggregations. Interpreting the results based on individual-based measures of poverty is affected by the fact that poverty is usually measured at the household level and therefore male poverty is intrinsically associated with female poverty and vice-versa.

History of the Term

The idea of a ‘feminization of poverty’ dates back to the 1970s but was popularized from the 1990s on by some United Nations documents. The concept became renowned as a result of a study by Diane Pearce, which focused on the gender patterns in the evolution of poverty rates in the United States between the beginning of the 1950s and the mid-1970s. It was initially used to mean “an increase of women among the poor” and “an increase of female headed households among the poor households”. This approach was abandoned because the measures of feminization of poverty based on them can be affected by changes in the demographic composition of population – for instance, the impoverishment of female headed households can be neutralized by a reduction of the numbers of female headed households in the population. For that reason, subsequent studies adopted an alternative approach, comparing the evolution of the levels of poverty within each gender group.

Evidence of a Feminization of Income Poverty

The overrepresentation of women among the income poor at a given moment seems to be much more common phenomena than the process of the feminization of income poverty. Actually, despite the enormous political controversy around the issue, there is little support to the claim that there is a systematic feminisation of income poverty in the world. Feminisation occurred in the United States between the 1950s and the mid-1970s, although some reject the hypothesis for the years after 1970 and the 1980s.  Data from the United Kingdom indicates that from the late 1960s to the mid 1980s there was no evidence of a feminization of poverty.

The causes of the Feminization of Poverty

The feminization of poverty, among many other factors, may be caused by changes in:

dissolution of marital unions, constitution of families without these unions, higher male mortality.

Gender division of labor and consumption within the household, gender roles regulating the control over household resources.

Inequality in the access to public services or in their quality

Women face a higher intensity of poverty than men in all nations. Poverty is a multi-dimensional lack of resources which may differ from family to family but the gender that is most exposed by poverty is females. When the families experience less or no earnings the first thing that is cut down is the requirements of the females. Fundamental causes of the feminization of poverty are single working members in the family, usually, women are given the responsibility of household and care giving which is a huge amount of work without any monetary benefit.

Unemployment rates for women are highest in India, there is a difference of 52% in the employment rates of males and females in India it’s due to various reasons inequality in the availability of jobs as some of the jobs are associated with or specified only for males. There is a notion that women only fit in the few jobs perfectly like teaching, medicine, beauticians, and designers.

Feminization of poverty is not only a consequence of lack of income, but also of lack of opportunities due to gender biases and fixed gender roles in some societies. Gender biases often deprive women of opportunities to independently pursue education or careers and are often linked to the expectation that women are responsible for childbearing and childrearing. Women’s increasing share of poverty is related to the rising incidence of lone mother households.

Many factors place women at higher risk of poverty than their male counterparts. Though low income is the primary cause of female poverty, there are many interrelated sources of this problem. Lack of income deprives women of basic needs, such as food and shelter, and limits their opportunities for advancement. As women disproportionately earn less income than men, they are deprived of basic education and healthcare, which lowers their lifetime earning potential. The responsibilities associated with motherhood further limit women’s economic attainment. Lone mother households, or households without a second parent or guardian, are the households with the highest risk of poverty. Female headed households (where no male is present) are most susceptible to poverty because they have fewer income earners to provide financial support within the household. Lone mother households relate to gender inequality issues as women are more susceptible to poverty and lack essential life needs in comparison to men.

Women in poverty also have reduced access to healthcare services and resources. Partly due to the toll of childbearing, women are disproportionately afflicted with poor health outcomes. Poor health reduced women’s ability to earn income, and, thus, is a key factor increasing and perpetuating household poverty. Increasing health services to women could, therefore, mitigate the feminization of poverty. The education of women and children, especially girls, can create greater opportunities for women to lift themselves out of poverty and increase their social position. Countries with strong gender discrimination and social hierarchies limit women’s access to basic education. Even within the household, girls’ education is often sacrificed to allow male siblings to attend school.

Employment opportunities are limited for women worldwide. Women are often barred from materially controlling their environment due to unequal access to profitable and fulfilling occupational opportunities. Employment can be divided into informal and formal occupations. Formal employment is government regulated, and workers are insured a wage and certain rights. Informal employment takes place in small, unregistered enterprises. A large proportion of women are employed in informal workplaces, reducing the regulation of their employment. This makes it more difficult for women to address workplace grievances and ensure safe and legal working conditions.

Femininization of Poverty is a collective effect of several factors, be it access to education or lack of health facilities that are available for women. Though access to education is the biggest factor, even today in many household parents think that it’s better to invest in a male child than in a female child as sooner or later they will go away and be part of another family. Due to which women are not able to qualify the eligibility criteria for the job even if they want to work and sometimes, they end up with a very basic job or no job at all.

In many cases women are suggested not to work and look after the household as their husbands are in good positions, therefore, they can support them. In such scenarios women depend on their husband’s income for a lifetime and have nothing of their own, they lose their self-esteem, decision making power, and sometimes entirely controlled by others. They seek permission for everything that they want to do if permissions are granted, they can pursue whatever they want to do else they just have to terminate their wishes and desires. A lot of recruiters do not want to hire females as they think that they will be having responsibilities of their household therefore they will not be able to do justice with their work.

Other than these the unequal pay is also a grave concern; mostly females are paid less than males doing the same jobs. The ones who suffer the most are the single mothers, elderly women, women who have lost their breadwinners who do not have any other source of income, women who are from the lower socio-economic background.

According to UNIFEM (2000) women make up 70% of the world’s 1.3 billion poor, and this figure is constantly increasing. If this issue is not acknowledged and conventional steps are not taken to minimize it, then all the programs run to empower women will be a waste because the above-mentioned problems are rooted in our system and faced by all the females irrespective of their positions in society.

Feminization of Poverty can be eradicated by practicing equity, presenting resources for the woman, practicing gender equality in term of pay which has the main impact on what kind of life a woman is living. Once this issue is eradicated women will be able to exercise and enjoy their rights, which are exercised by only a few women today. Major aspects that are required to be worked upon are ideological changes that promote equality, create opportunities for economic empowerment of women through macro socio-economic reform.

Problems faced by women but can be seen by everyone, feminist ideologies have been in practice for a few years now promoting women’s rights and improving the status of women in our society, but it is needed that men voicing their problems and encouraging others to bring the change, it is needed to understand patriarchy from a woman perspective. Deeply rooted values and beliefs that have a direct impact on gender roles need to be addressed and changed as required. Intervention programs and policies that are designed for disadvantaged women sometimes do not reach the women who need them; therefore more effective ways should be used so that these policies and programs can be used effectively for the empowerment of people.

Families need to be sensitized towards gender roles and gender norms and new schemes. Monetary support is provided to the parents of the girl child under various schemes still only 3 out of 4 girls complete their secondary education, it is believed other than monetary support it’s very important to explain the importance of educating girls to their parents. Education loans should be made accessible to young girls. Easily approachable skill training centers should be set up. Access to a medical facility for women is important. To improve the living conditions and position of the women in our society, we need to look into the embedded problems of our system, and patriarchal beliefs that are instilled in our society and rectify them so that even women can have access to their democratic rights and live their lives with dignity, and are not treated as second class citizens.