ALL ABOUT COOPERATIVE BANKS IN INDIA 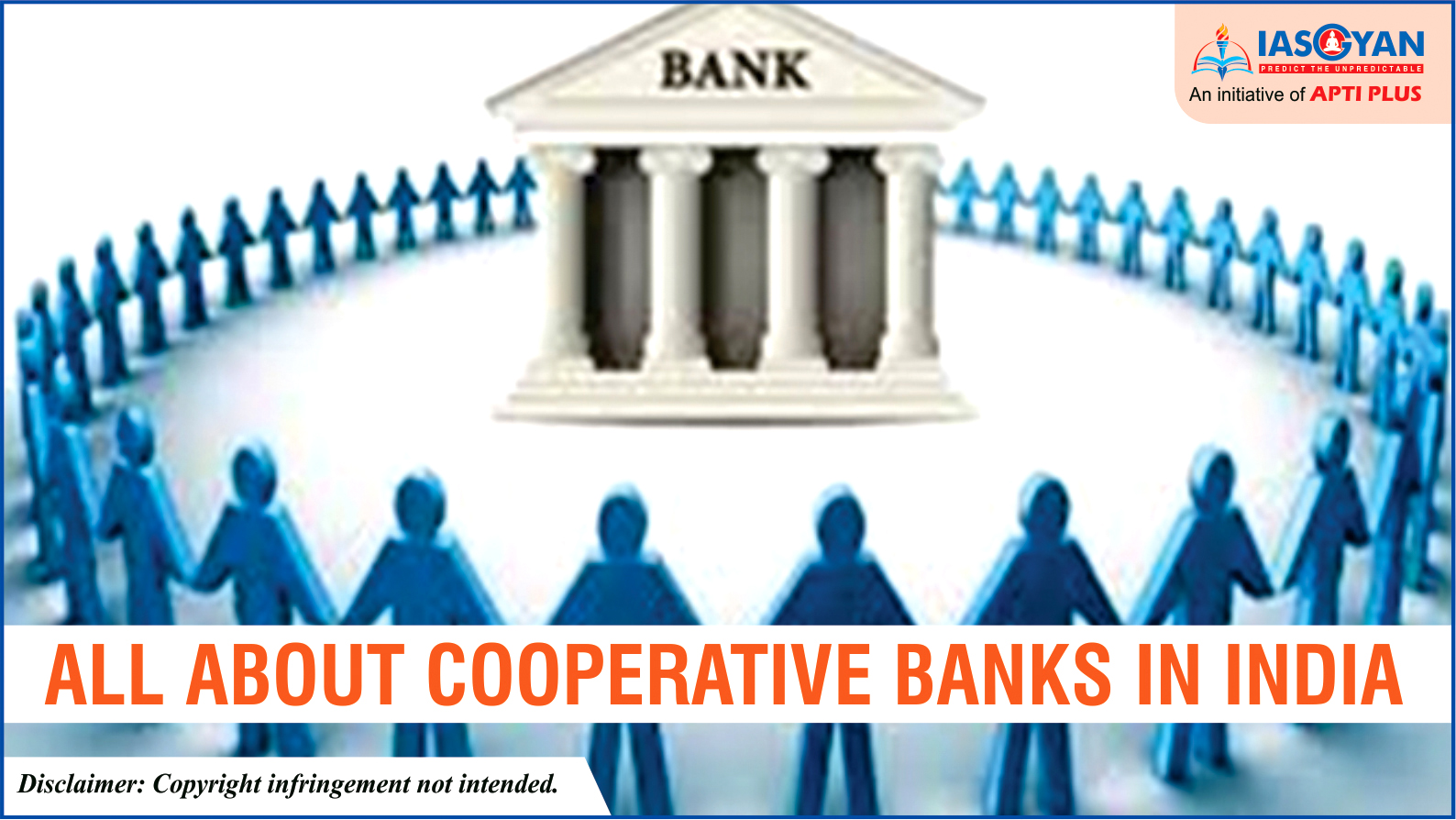 In India, co-operative banks play a crucial role in rural financing, with funding of areas under agriculture, livestock, milk, personal finance, self-employment, setting up of small-scale units among the few focus points for both urban and rural cooperative banks.

They provide a much-needed alternative to the age-old exploitative practice of people approaching the village moneylender, most often getting into a debt-trap that they struggle to pull themselves out of.

The cooperative banking system came into being with the aim to promote saving and investment habits among people, especially in rural parts of the country.

History of Cooperative Banks in India

The genesis of the cooperative movement and its implementation in a modern technical sense can be traced after the Industrial Revolution in England during the period of 18th and 19th century. The idea of Hermann Schulze and Friedrich Wilhelm Raiffeisen during the economic meltdown to provide easy credit to small businesses and poor sections of the society took shape as cooperative banks of today across the world.

Pre-independence period (prior to 1947)

British India replicated this model and based on the recommendations of Sir Frederick Nicholson (1899) and Sir Edward Law (1901), the Co-operative Credit Societies Act, 1904 was passed. It tried to deal with the problems of rural indebtedness and consequent conditions of farmers in the country. The Act promoted the establishment of credit cooperative societies which led to the formation of first urban co-operative credit society, registered on October 1904 at Kanjeepuram now in Tamil Nadu State. It marked the beginning of the institutionalization of the Cooperative Banking system in India. But there were certain defects in the Act which restricted the reach of the expected benefits of cooperatives. The Act only permitted the registration of credit societies, and there was no provision for the protection of non-credit societies or federal societies. These shortcomings were recognised by the Government and to remedy it; more comprehensive legislation was introduced, known as the Cooperative Societies Act of 1912. It recognized the formation and organisation of non-credit societies and the central co-operative federations.

In 1919, after the end of the first world war under the Treaty of Versailles,1919, the Montague Chelmsford Reforms were introduced in India under which Cooperation becomes a transferred subject which was to be administered by the States. The need for separate acts for effective implementation and to widen the reach of the cooperative banks was felt by the States. The Bombay Provincial Government was the first to pass its own act which was known as Bombay Provincial Cooperative Societies Act, 1925. Other state governments like Madras, Bengal, Bihar and Punjab followed the Bombay Act and passed their own legislation in the following years.

In 1942, the British Government enacted the Multi-Unit Cooperative Societies Act, 1942, the ambit of which covered societies whose operations are extended to more than one state. The Act provided for the regulation of affairs of such society by the provisions of cooperative societies act of the state where the principal business of the society is located.

After independence, the movement of cooperative societies maintained its pace even after facing several hardships during that phase and continued to be part of the economic development of the country.

The First Five Year Plan recognized the importance of cooperatives in the implementation of development plans, particularly targeting the farmers and weaker section of the society. In 1954, Government of India appointed a committee called All India Rural Credit Survey Committee to remedy the problem of rural credit and other financial issues of the rural community. It recommended a well defined institutional framework for cooperative organizations, particularly for meeting the needs of rural India. The recommendations of the committee were recognized and were put into effect under the Second Five Year Plan.

The Second Five Year Plan recommended expanding the scope of cooperative activities to other fields with special emphasis on the warehousing sector.

The Fourth Five Year Plan recommended the consolidation of a cooperative system for effective functioning.

The Seventh Five Year Plan also focussed on expansion and growth of the scope of cooperative societies so as to achieve greater employment and decrease poverty in the country.

What are cooperative banks?

A co-operative bank is a financial entity which belongs to its members, who are at the same time the owners and the customers of their bank. It is often established by people belonging to the same local or professional community having a common interest.

It is formed to promote the upliftment of financially weaker sections of the society and to protect them from the clutches of money lenders who provide loans at an unreasonably high-interest rate to the needy. The co-operative structure is designed on the principles of cooperation, mutual help, democratic decision making and open membership. It follows the principle of ‘one shareholder, one vote’ and ‘no profit, no loss’.

Cooperative banks differ from commercial banks on the grounds of organisation, governance, interest rates, and the scope of functioning, objectives and values.

Some of the main features or characteristics of cooperative banks are:

Cooperative banks are owned and controlled by members, who democratically elect the board of directors. The basic principle of co-operatives “one man one vote” is followed, irrespective of the number of shares held by a member, which ensures that no member enjoys any arbitrary power over other members.

A specified portion of the profits are transferred to Statutory Reserve and other reserves, and then a fair rate of interest is paid on the capital subscribed by the members. A part of this profit can also be distributed to the co-operative members, with legal and statutory limitations in most cases.

It plays a significant role in the financial inclusion of unbanked rural masses.

Structure of Cooperative Banks in India

Broadly, co-operative banks in India are divided into two categories - urban and rural.

On the other hand, Urban Co-operative Banks (UBBs) are either scheduled or non-scheduled. Scheduled and non-scheduled UCBs are again of two kinds- multi-state and those operating in single state.

Types of Cooperative Banks in India

The co-operative banking structure in India is divided into the following 5 categories:

Cooperative banks in India fund rural are as under:

Cooperative banks in India finance urban areas by virtue of:

Registration and legal requirements are comparatively easy compared to traditional banks. It takes a group of ten adults to form a cooperative bank. It needs a base capital of 25 lakhs only as compared to 100 crores of Small Finance Banks.

One of the objectives of the cooperative system is to provide easy accessibility to the rural section of the country so as to protect them from the clutches of greedy money lenders. These money lenders exploit the needy by providing credit facilities at higher rates and by manipulating their accounts. It acts as an effective alternative to this traditional money lending system.

Encouragement of savings and investments

It has encouraged the habit of thrift among the masses. Instead of hoarding money or spending unnecessarily, masses tend to invest and save their money.

Cooperative societies provide credit to agriculturalists at cheaper rates to buy inputs, warehousing facilities, marketing assistance and other facilities. These banks often provide assistance for buying cheap products and services and help them by introducing them to modern technology and better farming methods to improve their output.

Politicians use them to increase their vote bank and usually get their representatives elected over the board of directors in order to gain undue advantages like sanctioning of loans which later gets written off.

The supervision of RBI is not as stringent on cooperative banks as compared to commercial banks. RBI inspects the books of these banks only once a year.

Cooperative banks are controlled under the dual system, i.e. by RBI and by their respective State government which poses a problem in coordination and management.

Cooperative banks are often reluctant to adopt new technologies like computerised data management. Professional management in the banks is often missing due to lack of training of personnel because of lack of funds.

Overdue loans of cooperative banks are increasing yearly, restricting the recycling of funds which in turn affects the lending and borrowing capacity of the bank.

Measures to be taken

PMC Bank is not the first case of failure of the cooperative banking system in India. The Madhavpura Cooperative Bank scam in 2001-02 was a clear signal to bring certain changes in the regulatory and supervisory structure of cooperative banks. But no heed was given at that time. Since then, urban cooperative banks are failing with alarming regularity. Their numbers fell from 1,926 in 2004 to 1,551 in 2018, as per RBI data. These issues need to be addressed and remedied if the Government wants the public to place their trust in the country’s banking system.

In 2015, an RBI panel under R. Gandhi, a former deputy governor at the Central bank, had proposed several governance reforms for the cooperative banking sector, some of which are as follows:

Cooperative banks play an integral part in the implementation of development plans and are important for the effective functioning of the banking system in India. India is termed as an underbanked country, and after so many scams, it is need of the hour to take necessary measures to remedy the lucane and to boost the confidence and trust of the public in the banking system.