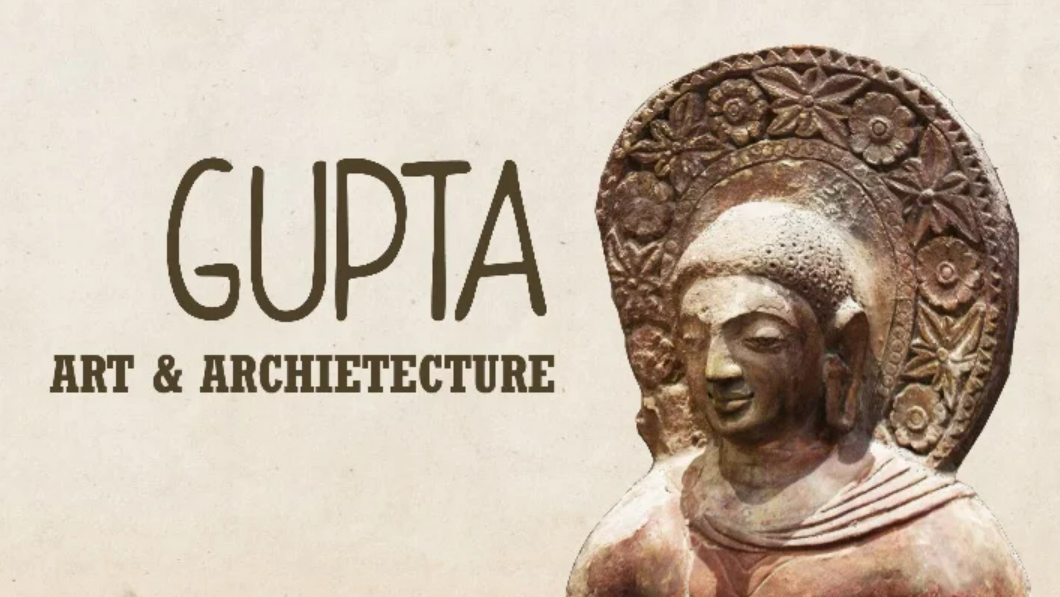 The foundation of the Gupta empire in the 4th century A.D. marks the beginning of another era. The Gupta monarchs were powerful upto the 6th cenutry in North India. Art, science and literature flourished greatly during their time. The iconographic canons of Brahmanical, Jain and Buddhist divinities were perfected and standardized, which served as ideal models of artistic expression for later centuries, not only in India but also beyond its border.

It was an age of all round perfection in domestic life, administration, literature, as seen in the works of Kalidasa, in art creations and in religion and philosophy, as exemplified in the wide-spread Bhagavata cult, which identified itself with an intensive cult of beauty.

The Gupta period saw the mighty upsurge of national art. This period is popularly known as the Golden Age in the history of India. The famous Gupta emperors were Samudra Gupta who ruled in 325-375 CE, Chandragupta Vikramaditya 376 -413 CE, and Kumara Gupta 413 - 455 CE. Indian literature, religion, art and literature attained the great height of their glory. The Gupta art and culture not only spread to every nook and corner of India but also reached the Himalayan region and Central Asia. This cultural phase extended towards the south-east across the ocean into the islands of Indonesia or what was known at that time as Dvipantara. This cultural development was due to economic prosperity. This had a direct relation on the spirituality, which India had not seen before.

The 4th to 6th  century CE was an age of all-round perfection in domestic, administrative and cultural life in India. In literature, this period has produced the great poet Kalidasa. Art creation had a great influence of religion. The Bhagavata movement, faith in Krishna as a child and god was widespread and supported a cult of beauty and aesthetics. It promoted the building of temples, creating images in clay, stone and metal. Buddhism was equally patronized as we can see in the artistic activities in Ajanta.

The renowned Gupta sculptural style appears to have grown out of the Kushanstyle. In Mathura, art had already flourished in Indian style, which was touched with refinement in all aspects under the patronage of the illustrious Gupta rulers. The Gupta period (4th – 6th Century CE) marks the bright period of art in India. Gupta art is marked by a high aesthetic sense and discipline. The main centres of Buddhist art during this period were Mathura, Sarnath and Nalanda in the north.

The Buddhist images of Mathura and Samath are some of the best specimens of Indian art, never equaled by any art creations oflater period. The other places where we get to see Gupta sculptures are the Vishnu sculptures in Udayagiri rock-cut Caves, Dhamek stupa at Samath, Bhitargaon, Buddhist caves in Ajanta, Ahichchattra, and Dasavatara Temple in Deogarh.

A geographical survey of Gupta art reveals that almost every centre received the flow of the essence of golden age. It was a special temperament to create anything good and perfect in quality and content. Art in Gupta period achieved classical status. Many texts were return and used as module for creating art works. The dynasties which ruled after the Gupta age in north and south India imbibed the artistic elements of Gupta age and continued the tradition of idealistic beauty.

We find many sculptures done in high relief. In Ajanta, the rock surface was sophisticatedly treated with the Buddhist theme and motifs in high relief. The relief was executed with utmost skills. The halo of Buddha, the decorative elements on the large size sculptures and stupas show the mastery of artists over the stone carving.

Since the sculptures at Ajanta were carved in impressive size, the sculptors followed the bas-relief technique. The Buddha images and stupa decorations are carved in live rock with three fourths of the image emerging out.

This is an exclusive figure and a masterpiece of Gupta art. It is in the collection of National Museum, Delhi. The large size halo gives a great visual impact. A number of lesser size images of similar features are found in Sarnath and have been categorised as 'wet Buddhas'. The appearance of these figures is such as they have just come out from water. The modelling of the body beneath the thin garment is highly sophisticated. The hair is neatly combed in tuft and the face is serene. It is made of brown sand stone from Sikri.

This seated Buddha made in Chunar sand stone is in the collection of the Sarnath museum. Buddha is in a preaching attitude known as Dharmachakra mudra. His clothing is only suggested through hemlines. The halo has special carving which is repeated on the throne beautifully. Two Gandharvas in flying mode on the sides of the halo suggest the heavenly status of Buddha. This is the master piece of Gupta art. 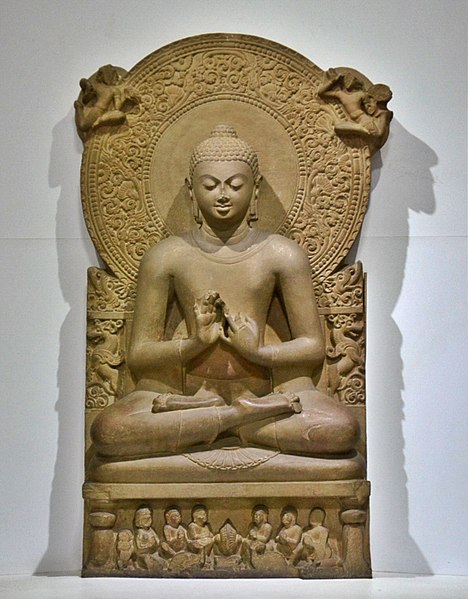 This is an exclusive female figure of Gupta period (Later the images of Ganga and Yamuna flanking the door way of the temples become common feature all over India). She stands on the crocodile to show her presence in water. The figure is more realistic and stands in tribhanga. The two small figures next to her are in action. The tree is shown bearing plenty of fruits. The entire panel is a good example of an artistic composition. 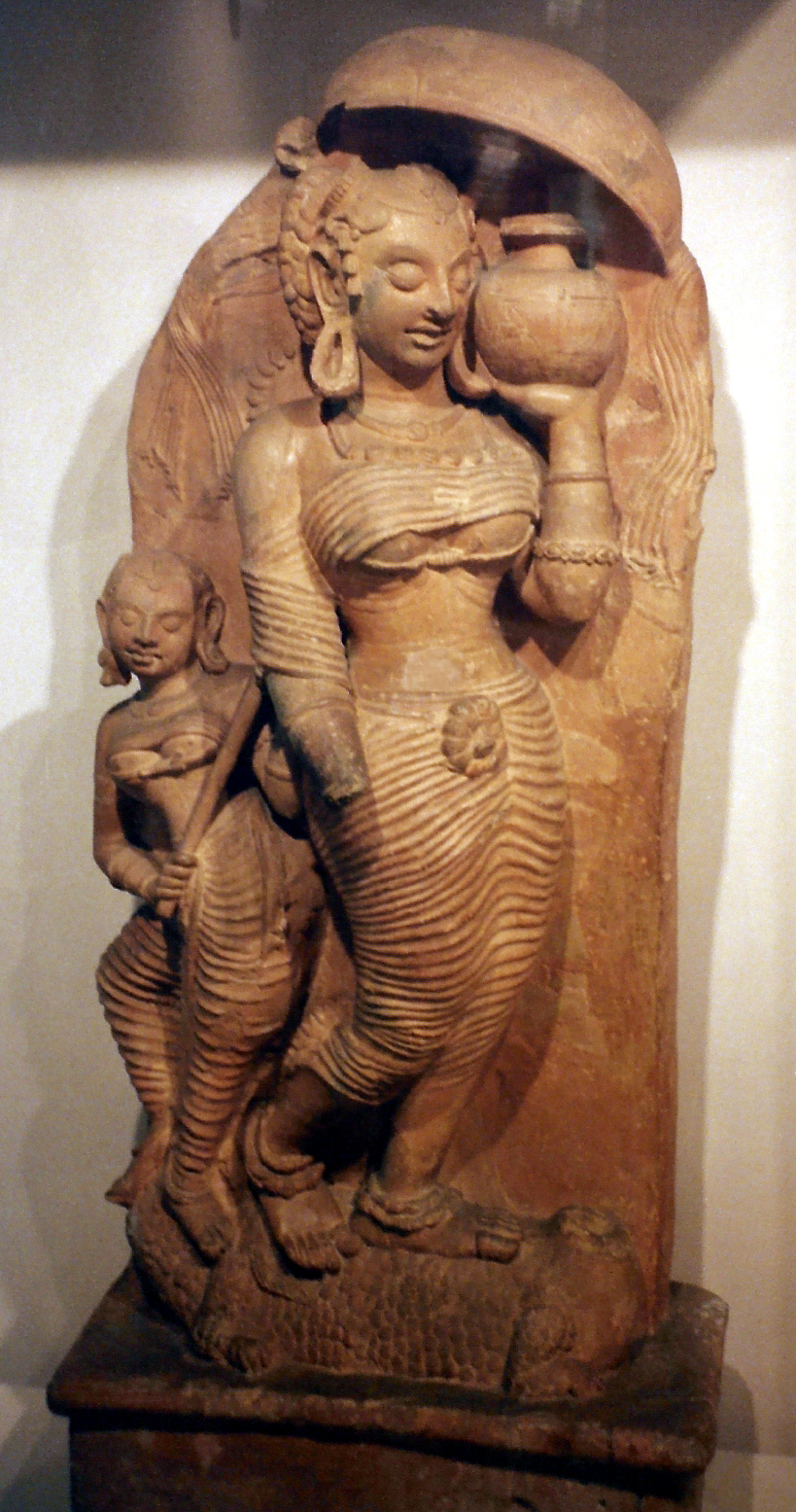 In this sculpture the Buddhist narrative feature is adopted for the first time in all its detaiL Lord Vishnu, one of the Trimurtis is portrayed as reclining on a giant serpent with several hoods. He is the Preserver of the world order and plans for its execution. The world around him is in action. Brahma rising from umbilical cord of Vishnu is associated with the celestials; Lakshmi seated on the extreme corner and below a group of celestials are guarding the abode of Vishnu. This is an iconographic presentation of the Vishnu theme. The artist has composed all the figures in upper, middle and lower registers. It stands as the first and best example for the Hindu theme in sculpture. 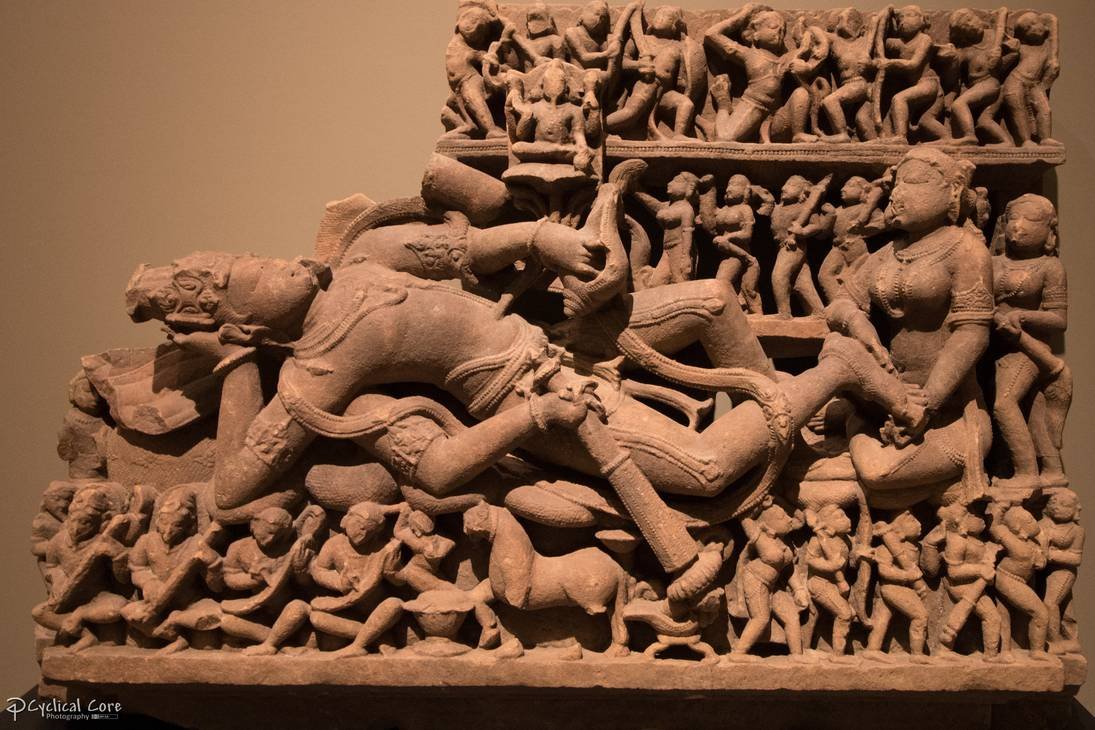 One of the main features of the Gupta sculptures is the balance that has been achieved by the artist between the beautiful poses and the spiritual expressions. The Gupta sculptures presented the human figures at their best. Whether they were spiritual or mythical, the human figures displayed elements of robustness and lively. Apart from the human and religious sculptures, terracotta sculpture and decorative sculptures also have well defined human forms. The other recurrent features included thick floral sculptures, carved scrolls, animal figures and others. Apart from the rock cut sculptures the Gupta artists were equally adept in working on metals. The iron pillars at Delhi are an instance for this kind of sculpture. The predominant style which was followed by the artists was "cire perdue". In this process the copper statues were cast on a large scale. A copper image of Lord Buddha cast in Nalanda, which was 80 feet high, is worth mentioning.

The art and architecture of the Gupta period have been forever engraved on the walls of the Ajanta caves. Apart from the sculptures these caves are also famous for their wall paintings. Speaking about the religious sculptures, those deities were carved out of stone which the human eyes have never before beheld. The descriptions of such Gods and Goddesses were heard of but they existed only in the imagination. It is always a challenge to present gods and goddesses in a human form as the sanctity of these deities had to be kept intact. The expressions on the faces of such sculptures were devoid of any material pleasure. The expressions on these idols were undisturbed by the worldly affairs. The apparels were presented by the series of folds carved on the figure of the deities yet the elegant forms were not hidden under these clothes. Such sculpted figures are widely found in Mathura. This rock architecture in Mathura is quite well known.

The sculptures created during the Gupta period were perfect, without any blemishes. In fact according to historical evidences the artists followed the science of 'chitra.' The immediate events inspired the artists to a large extent, for example, the seated Buddha at Sarnath delivering a sermon. Another feature of Gupta sculpture is the cave that was carved within the hills. The caves were the perfect places for the deities to reside as there is tranquillity within these structures. For instance, Elephanta Caves also exhibited spectacular Gupta sculpture.

The religious tolerance of the Gupta kings is evident from the fact that there were Hindu and Jain sculptures as well. The Hindu sculptures at Udaigiri were made out of wood. One of the most outstanding sculptures at Udaigiri Caves is the 'Varaha' avatar of Lord Vishnu. It is represented with a head of a boar (varaha) and a human (nar) body. This image has its roots in the Indian mythological tales. This bas relief measures 22 feet by 12 feet. The entire mythical event is presented in details in Udaigiri. These caves are also famous for the iconography of Mahishasuramardini and one-faced linga or Ekmukhalinga. The Gupta sculptures also drew heavily from the epics, Ramayana and Mahabharata. Snakes were an essential feature of Gupta sculpture, particularly during the 5th century. One will notice the presence of some serpent hoods emerging from 'naginis' and 'nagarajas', from the upper part of a pillar in the area of Firozpur.

Other dominant architectures from the Gupta Empire included the rock cut temples, chaityas, stupas and others. During this age the square 'Garbhagriha' emerged with pillars in the temples. The temple walls were ornamented with the sculptures of celestial beings, animal forms, deities and their consorts, couples and the everyday themes included dancers, musicians, military processions, scenes from royal court, apsaras and others. Eroticism was also a popular feature of Gupta sculptures. The interiors of Vaishnavite Tigawa Temple at Jabalpur, Dasavatara Temple at Deogarh and Bhitargaon Temple all of which are located in the central Indian state of Madhya Pradesh are excellent specimens of the sculpture prevalent during the Gupta age.