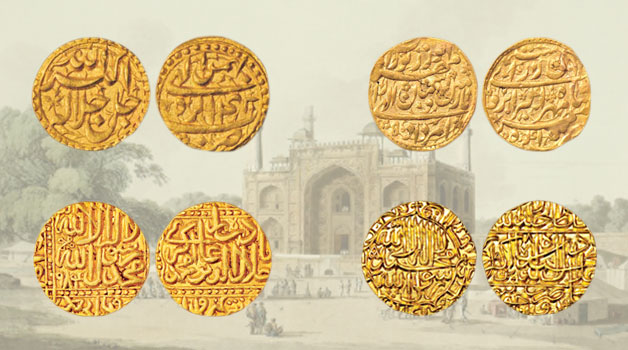 The Mughal Empire ruled much of South Asia for over three centuries. Mughal emperors accumulated vast wealth, with an economy based on a stable and abundant coinage in gold, silver and copper.

Broadly, the coinage of the Mughals can be sorted into four phases:

These coins carried the nominal consent of the ruling Mughal emperor and were issued in his name. 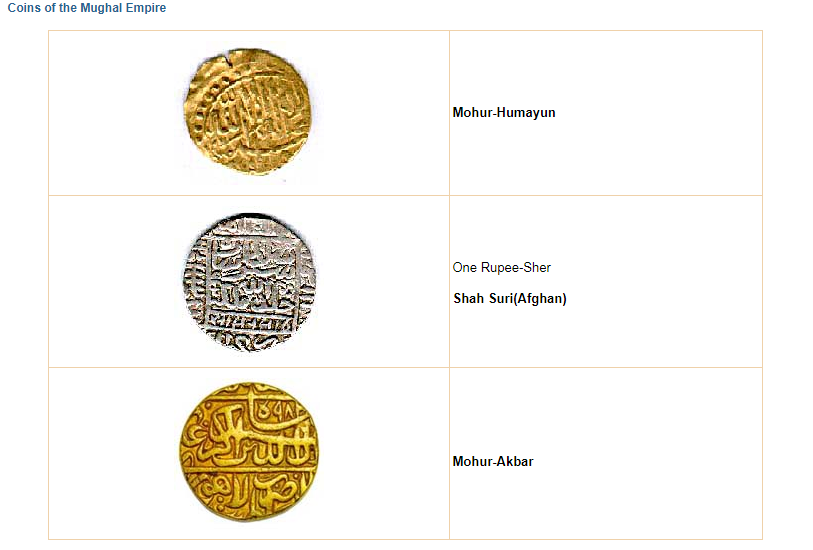 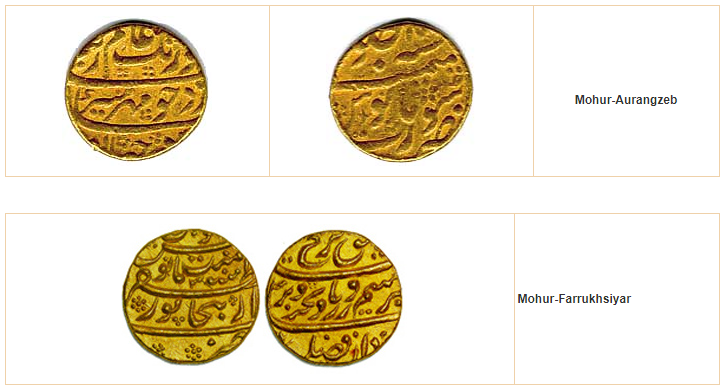 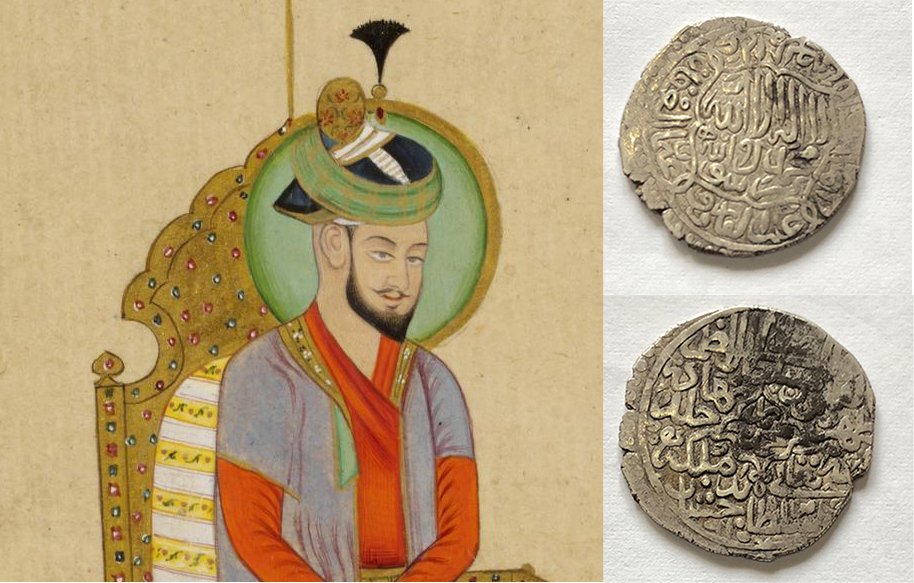 Babur’s early coinage was struck in Afghanistan. A unique mithqal or ashrafi (a gold piece of 4.7 grams) dated to about 1523 CE.

In 1524, Babur invaded India, defeating the Sultan of Delhi in a great battle at Panipat. From his new capital at Agra, Babur issued broad, thin silver coins of about 4.6 grams called shahrukhi. “Shahrukhi” was the staple Timurid currency coin.

Named after Shahrukh Mirza, Timur’s eldest son, the Shahrukhis were essentially thin broad-flanned coins imprinted with the Sunni Kalima (Islamic Phrases) on its obverse at the centre with the names of the first four caliphs around it. The reverse had the king’s Islamic name and titles along with the date in the Hijri era and the name of the minting town. Babur continued to issue Shahrukhis throughout his political career from Kabul to Agra, where he died on 26 December 1530. 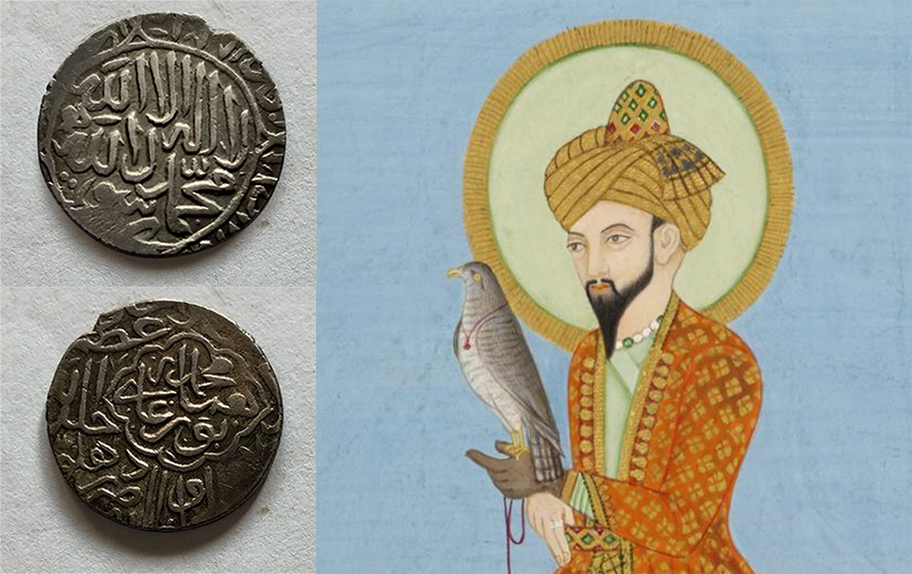 The Shahrukhi standard was continued by Babur’s immediate successor, Humayun and even by his grandson, Akbar. After ruling for 10 years, Humayun was defeated and driven from the throne by Sher Shah Suri, an Afghan warlord who established an extensive but short-lived empire (1540-1556.) Humayun fled to Persia, finding refuge at the court of Shah Tamasp I (ruled 1524-1576). In 1555, with Persian help, Humayun re-conquered Delhi.

During Humayun’s exile, his rival, Sher Shah innovated a new silver coin christened the ‘rupaiya’—which survived the Afghan ruler by over four-and-half centuries to become the modern rupee.

One of the major reforms attributed to Sher Shah is a move from base metal alloys to bimetallic currency, like the silver rupaiya and a copper coin called the paisa (the Mughals would call it daam).

So, in the conclusion, Suri Empire left a reformed and largely standardized coinage, consisting of the gold mohur (about 11 grams), the silver rupee (about 11.5 grams), and the copper dam or paisa (of variable weight). One Mohur typically traded for 15 rupees, and one rupee exchanged for 48 dam, but the market value of gold, silver and copper fluctuated freely. 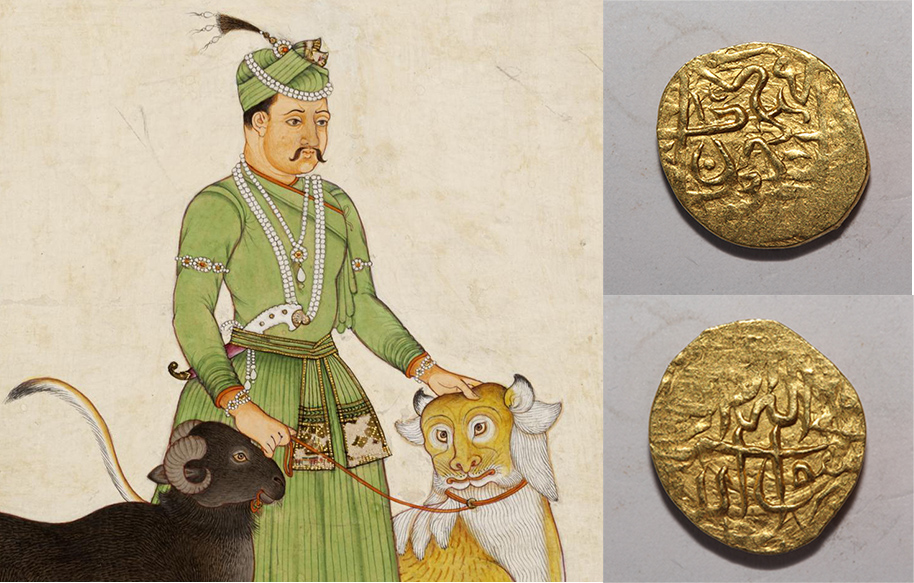 Sher Shah’s system was adopted by Akbar who ditched the Shahrukhi for the rupaiya and also introduced gold coins called asharafi (mohurs).

This trimetallic currency had the following market exchange rate:

Akbar also issued heavier mohars worth 10 and 12 rupees and experimented with the shape of coins, issuing square and even polygonal ones called mehrabi.

Beginning with Akbar there followed a two-hundred-year period when Mughal currency dominated the Indian subcontinent.

Mughal coins came to be made in all three metals at the imperial mints established in Agra, Delhi, Ahmedabad, Lahore and other important towns. Akbar’s period also saw huge gold coins or mohurs being minted in multiple units of 5, 50 and 100 tolas, a policy that was continued by his successor, Jahangir. One such coin, the heaviest of its kind in the world at 1000 tolas (around 12 kg), is part of the collection of the Museum of Islamic Art in Kuwait.

Akbar’s eclectic religious beliefs are also reflected on his coins; his initial coins were issued with the Sunni Kalima till 1585 but in the thirtieth year of his reign, he founded a new religion called Din-i-Illahi and issued coins with its credo: ‘Allah hu Akbar Jalla Jalaluhu’ (God is great, may His glory be glorified). He also began dating his coins as per a new ‘Illahi era’, which replaced the earlier Hijri era. It was Akbar who introduced the practice of inscribing on coins Persian poetry praising the ruler and this was adopted by most of his successors, including Aurangzeb.

Akbar’s abundant silver rupees occur in both round and square formats. Perhaps the most surprising coin of this extraordinary ruler is one issued in Akbar’s final year that depicts full-length figures of the Hindu deities Rama and Sita.

Akbar’s copper coinage includes fractions, such as the falus (about 4.4 grams), indicating a vibrant urban economy in which people need to make small daily purchases. 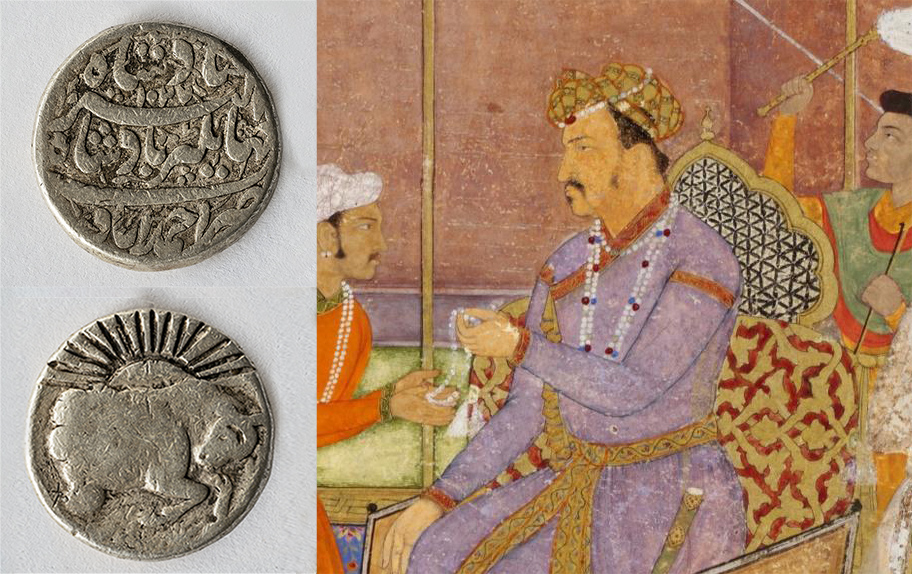 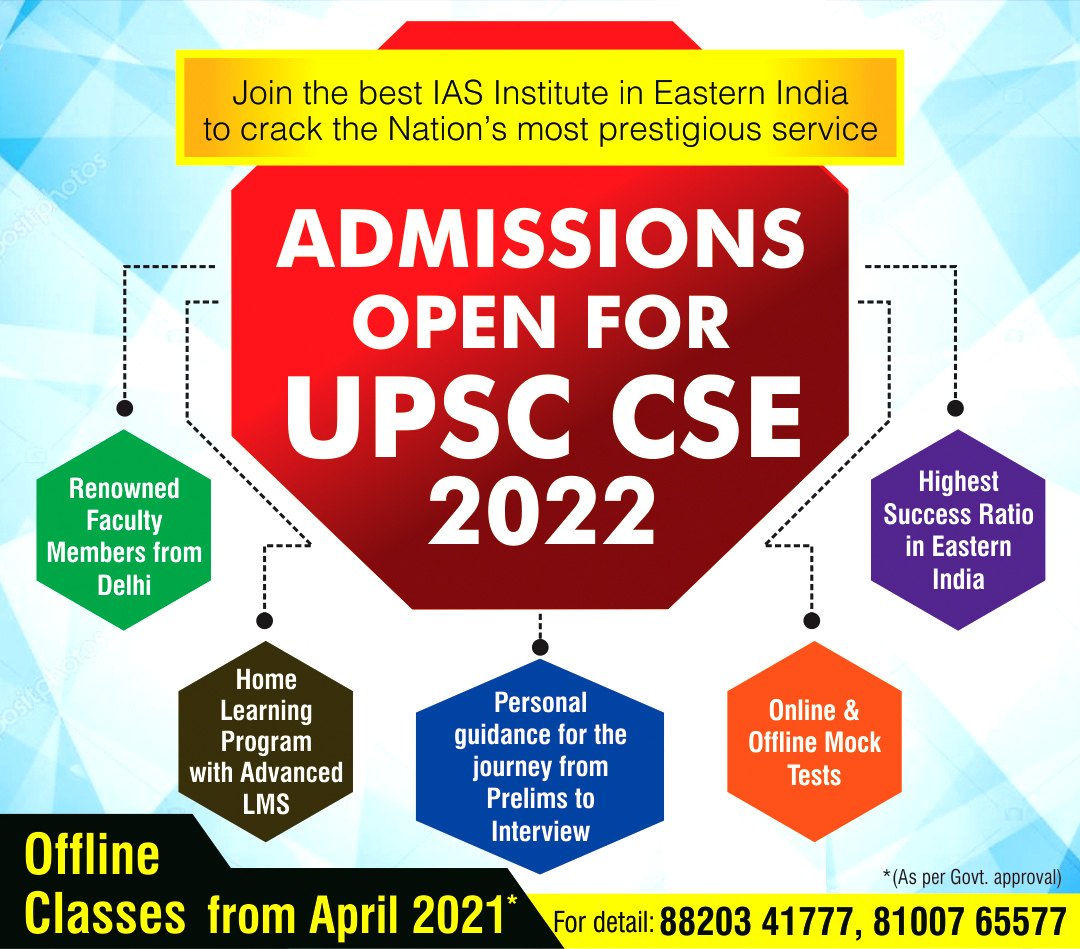 Jahangir began his reign with gold coins featuring a realistic portrait of his father. Jahangir’s best-known, most avidly collected coins are the “Zodiac” series in gold and silver depicting the 12 astrological signs.  He also issued coins with portraits of himself with a cup of wine in his hand. There was partial resumption of the use of the Hijri era on his coins. He issued what must have been the largest gold coin created before modern times, a 1,000-mohur presentation piece weighing nearly 12 kilograms.  Jahangir issued many gold and silver coins with poetic verses on them and was the only Mughal emperor to bestow the right of coinage to his wife Nur Jahan. Nur Jahan was the first queen after Razia Sultana to issue coins. 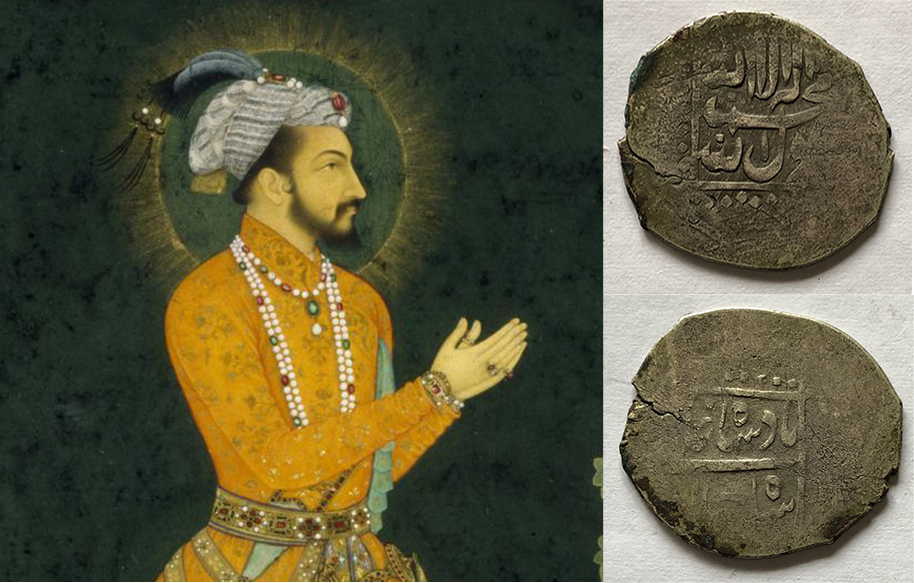 His regular coinage abandoned the pictorial depiction of his father’s coins, returning to the orthodox, purely calligraphic designs.  Shah Jahan began his rule by reintroducing the Kalima on his coinage and using the title ‘Sahib-e-Qiran Sani’ (the Second Lord of Fortunate Astronomic Conjunctions) paraphrasing an earlier title used by Timur on his coins. Shah Jahan tried to appease the orthodox clergy by ordering the melting of Jahangir’s portrait and zodiac coins. This is what makes the rare surviving specimens so precious. 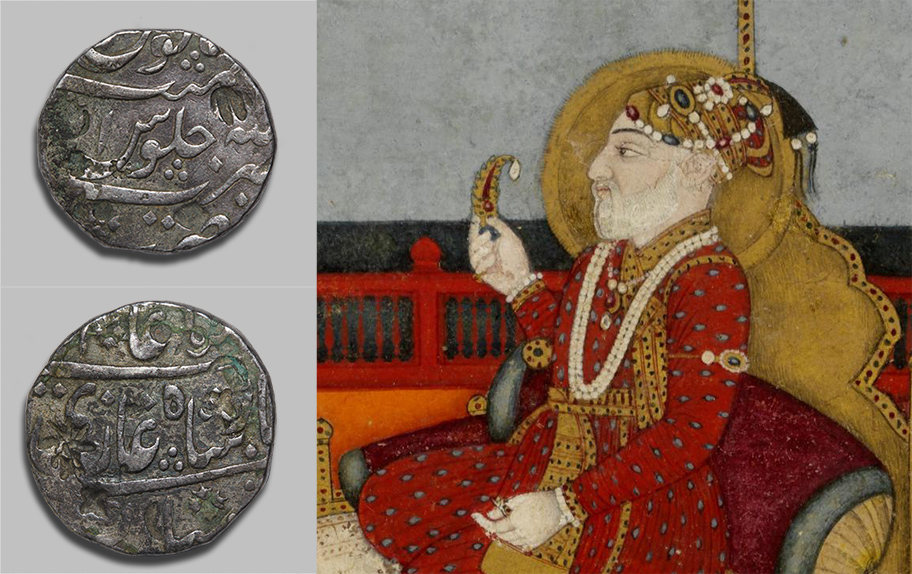 Aurangzeb felt that verses from The Quran should not be stamped on coins, as done in former times, because they were constantly touched by the hands and feet of people. His coins had the name of the mint city and the year of issue on one face, and, the following couplet on other:

Stamped coins, in the world, like the bright full moon

Aurangzeb’s coins in gold, silver, and copper are mostly common.

Aurangzeb’s death in 1707 set in motion the downward slide of the empire with the emergence of regional and foreign powers who slowly usurped the minting privileges of the Mughal emperor. The minting rights of Chinnapattan (Madras) for instance were attained by the English by bribing Aurangzeb’s youngest and favourite son, Prince Kam Bakhsh.

A latter emperor, Emperor Farrukhsiyar, began the ruinous policy of issuing farmaans or edicts for minting rights—the East India Company obtained the rights to mint coins in the name of the Mughal emperor from Bombay in 1717 after supplying him cartloads of English novelties as a bribe.

Mughal power was finally shattered when Emperor Shah Alam II lost the Battle of Buxar in 1764 A.D. to the East India Company’s army and became a puppet in the hands of the British who entered Delhi in 1803 A.D. The British continued to issue coins in Shah Alam’s name till his death and his successor Muhammad Akbar II forfeited all minting rights in 1835 when the East India Company substituted the Mughal emperor’s name with that of the English monarch and introduced English legend coins as the official Indian currency.