Books by Freedom Fighters of India 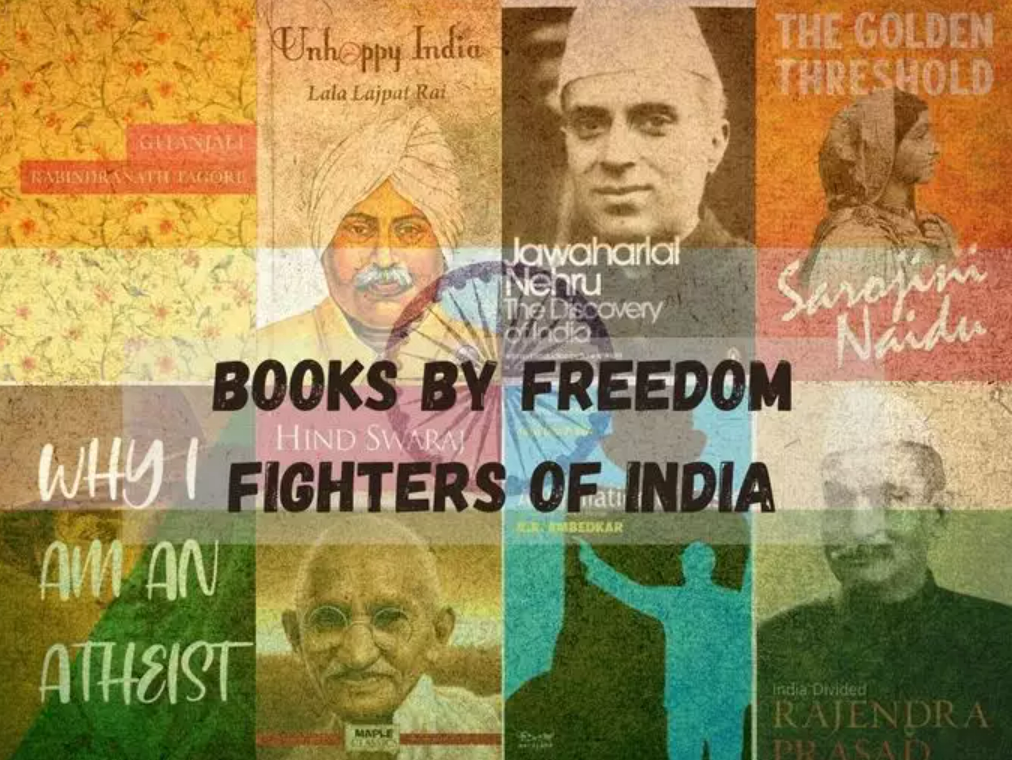 The book was banned by the British government under the pretext of being seditious. It is written in the form of a dialogue between Gandhi and his close friend, Pranjivan Mehta as they argue about beliefs based on civilization, conditions of India and England, passive resistance, and education.

‘Why I am an Atheist’ by Bhagat Singh

It is Bhagat Singh's one of the most famous essays. ‘Why I am an Atheist’ was written in 1930 while he was imprisoned in the Lahore Central Jail. The essay was a reply to Singh’s religious friends who thought he became an atheist because of his vanity and self-admiration.

The book is a collection of 103 poems selected by Tagore from his books of Bengali poetry. It has an introduction by W.B. Yeats. The poems are primarily devotional and have a mystic aura.

​‘The Golden Threshold’ by Sarojini Naidu

The book traces the origins and growth of the Hindu–Muslim conflict and gives the summary of the several schemes for the partition of India which were put forth. It also shows how the suggested scheme of Partition was unfeasible and proposes a new solution to the Hindu–Muslim dichotomy.

​‘The Discovery of India’ by Jawaharlal Nehru

The book was written during Nehru’s four years of confinement to solitude in prison and is his way of paying a homage to his beloved country and its rich culture. The book is a broad view of Indian history, culture and philosophy.

In this book, Lala Lajpat Rai gave a reply to Katherine Mayo, a journalist who wrote a biased book on India depicting only its problems. Rai compared Indian society with the USA and Britain of that time and pointed out that their situation is not much different than India.

​‘Annihilation of Caste’ by BR Ambedkar

Known as the ‘Father of Indian Constitution’, Ambedkar, in this book argues that the immorality of caste was sustained by the Vedas and Shastras, and without “dynamiting” them there could be no reform. This essay talks about the caste system and the need for its destruction.

As the title suggests, the book narrates the struggle India went through during the inter-war period. The book also perfectly etches the assessment of Mahatma Gandhi’s role in the Netaji’s reflections on the key themes in the history of India.

Maulana Azad has written India Wins Freedom from his perspective. He has shared his personal experiences of India’s independence and his views on freedom and liberty.

Written in 1899, Sri Aurobindo’s Love and Death is a narrative poem based on the Mahabharata.The book looks at the concept of freedom first from the lens of a revolutionary leader and poet, and then through the eyes of a mystic. What is the meaning of freedom? This was a question that hounded him for years. The book is thus his way of striking the right balance between individual freedom and the society’s collective interests. To him, love and death were intricately linked to the notion of freedom, which in turn was the most integral aspect of the human spirit.

Set during the Bengal famine of 1770, Anandamath played a crucial role in the Indian freedom struggle. The story follows a married couple, Mahendra and Kalyani, who become separated after leaving their famine-affected village. They are found by the sannyasis, a rebel group, whose members are willing to sacrifice their lives in the fight against injustice and oppression. As Mahendra is tempted to join their cause, he is told that he must give up his wife and child and dedicate himself completely to the service of Mother India. The book acted as a wakeup call to many Indians to contribute to the freedom struggle. Even after the book was banned under British Raj, one of the poems from the book, Bande Mataram, became extremely popular among the freedom fighters. The beginning two stanzas of the poem were adopted as India’s National Song after Independence.

The theme of anti-colonial nationalism is evident in Gora, published in 1909. In Gora, his longest novel, Tagore explains the importance of a national identity which goes beyond caste, creed and religion. The story follows a fair-skinned man, ‘Gora’, an orthodox Hindu who dreams about his ideal Bharatvarsha, a prosperous and happy India. He believes that this can be achieved by uniting everyone under the mantle of Hinduism. However, everything changes when he comes into contact with the Brahmo Samaj and finds himself questioning his own religious identity vis-à-vis his national identity.

Lala Lajpat Rai  The Arya Samaj; The United States of America: A Hindu's Impression and a Study; The Story of My Deportation; The Problems of National Education in India.

Bal Gangadhar Tilak — Gita Rahasya/Karmayog Shashtra; The Orion: Or Researches into the Antiquity of the Vedas; The Arctic Home in the Vedas.

Mahatma Gandhi — The Story of My Experiments with Truth; Gokhale: My Political Guru.

BR Ambedkar —The Buddha and his Dhamma; Pakistan or the Partition of India; Riddles in Hinduism; Who were the Shudras?

JL Nehru — Glimpses of World History; Letters from a Father to his Daughter.

Rajendra Prasad — At the Feet of Mahatma Gandhi; Satyagraha in Champaran.

Aurobindo Ghosh — Essays on the Geeta; The Life Divine.

Vinayak Damodar Sawarkar — The Indian War of Independence; Hindu Pad Padashahi; Hindutva: Who is a Hindu?

Sarojini Naidu —The Bird of Time; The Feather of the Dawn.

Annie Besant — The Ancient Wisdom; My Path to Atheism.

MG Ranade — Religious and Social Reform: A collection of Essays and Speeches; Essays on Indian Economics.

CF Andrews — The Renaissance in India.

Lala Hardayal – Hints For Self Culture