PENDENCY OF COURT CASES IN INDIA

Pendency and Vacancies in the Judiciary: Vital Stats

Pendency of cases rising across courts; over four and a half crore cases pending at present 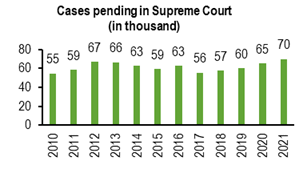 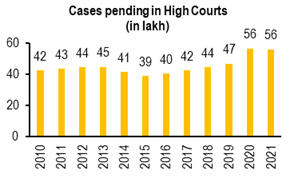 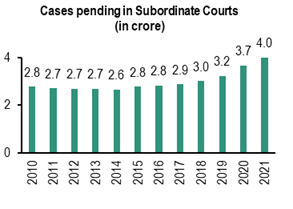 Vacancies in the judiciary also contribute to high pendency of cases

Undertrials on the rise 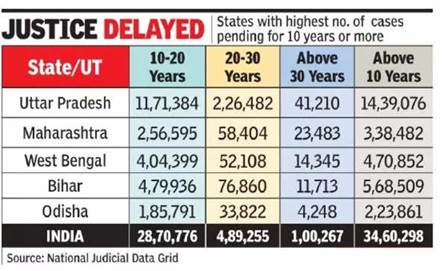 Why do Indian Courts have a huge backlog of cases?

Increase in the awareness of rights by a common man

There are not enough judges

There are not enough courts

There is too much litigation from the Government Side

A Bloomberg Businessweek estimate states, “If the nation’s judges nonstop battled their backlog — with no breaks to eat or sleep — and closed 100 cases per hour, it will take more than 35 years to catch up.”

The Process should not be a Hurdle

The 221st Report of the Law Commission

The 230th Report of the Law Commission:

“Justice delayed is justice denied" is a common aphorism that is often cited while talking about the pendency of cases and jurists note that the achievement of some of the fundamental aims of the Indian Constitution is frustrated by the mounting backlog of cases.